As the name suggests, American Built Arms Co is an American based manufacturing company that specializes in firearms related parts. Founded in 2010, AB Arms is veteran owned and operated. While they’ve made a few small parts and pieces the Mod X is their first entry into manufacturing a product that incorporates all of those parts and pieces. It also marks their first entry into the multi purpose bolt action rifle market.

The Mod X chassis is available for the Remington 700 Short Action rifle only. It accepts a standard AR stock and grip, as well as an AICS pattern magazine. The Chassis features a 13.5” Keymod handguard with a full-length top rail and 20 MOA scope base. At 3.5lbs this is one of the lighter chassis systems on the market. The updated version is even lighter at just a hair over 3lbs. Installation of the chassis is pretty straight forward. The two action screws are bolted through the chassis into the action. The rear action screw is obscured by the grip, a minor inconvenience. Because of the location and depth of the rear action screw, it can be tricky to get to with a torque wrench. An extension may be necessary. Once the action screws are torqued, the handguard with top rail can be slid down the barrel and bolted into place. Once the two screws at the bottom of the handguard are torqued the top rail’s scope base can be torqued and the chassis is ready to go! Mount your optic and hit the range.

The Mod X is an extremely attractive package. It’s somewhat compact and streamlined, it’s light weight, and damn does it look cool. The full-length 20MOA top rail ensures you’ll have plenty of room for a large scope, and maybe a night vision optic, too. The Keymod slots make it easy to add or remove things like sling mounts or bipod mounts. The ability to interchange the stock and grip with standard AR parts is a feature that makes the Mod X that much more modular. The oversized trigger guard allows the gun to be used with even large winter gloves. The whole kit balances well and is rather comfortable to shoot.

While I do like the Mod X, there are some negatives. The adapter that allows the stocks to thread on is bolted onto the rear of the chassis. It seems like a bit of an afterthought. Unfortunately, it adds a couple inches of length, making the LuthAR stock it was shipped with come to a length of pull that sits just over 15” with the stock fully collapsed. I was able to remedy this by cutting the stock itself, along with the included buffer tube, then put a couple of button head screws through the stock into the tube hold it into place. Now the LOP is a more manageable 13.5”. Because of the handguard design, the scope base sits rather high. Looking at where the base bolts to the receiver, you can see the thickness of the mount when compared to a standard rail. In a race to get the lowest possible mount for your scope, this only increases the height over bore. The top rail and scope base being connected bring another problem. When the bipod is loaded, it flexes the handguard. The handguard bends up and back. The top rail on the handguard is pinned to the scope base, which means that as the rail on the handguard flexes, so does the scope base. This can throw off your scope’s zero at extended ranges. I’m also not crazy about the magazine release. It’s a button on the front inside of the trigger guard. Pushing it moves a little paddle inside the magwell and drops the magazine. I understand the appeal as it allows the magazine to be easily dropped by the firing index finger; however I’m not a fan of putting my finger into the trigger guard unless I’m pulling the trigger. Also, largely personal preference, the recoil lug pocket on the Mod X only fits the factory Remington lug.

Many of these issues have been fixed in AB Arms’ updated Mod X. They’re now offering both a fixed and folding stock, which brings the LOP down to a more standard length The grip has been moved back to a more natural location which also allows access to the rear screw without removing the grip. The top rail has been shrunk allowing the scope to sit closer to the bore’s axis. They’ve also opened up the recoil lug pocket to allow for oversized lugs.

Shooting my example of the Mod X was at times frustrating. Unfortunately, the best groupings I was able to get were roughly 1” at 100 yards. While not terrible, I would certainly hope to see better than that. In all fairness to the chassis, I was unable to prove the barreled action by installing it in a better stock, so it very well could be an issue relating to my barrel or action. I see no issues with the fitment of the chassis that lead me to believe it is solely responsible for the mediocre groupings.

I found that the Mod X was quite comfortable to carry while hunting in mountainous terrain. This weight and balance make it easy to handle. At no point did it become a burden when I was dragging myself over frozen mountain trails in search of game. Its compact size made it easy to avoid snagging. It made an excellent mountain gun package. It’s equally at home at the range. Its size makes it easy to pack to and from your favorite shooting spot. The interchangeability of the stock and grip allows you to pick whatever is the most comfortable for you. The long hand guard allows the user to put the bipod way out towards the muzzle, making the whole package more stable. While the range may be mildly limited by the one peice top rail and scope base, most users won’t notice the difference and I was still able to hit steel gongs out to 1100 yards.

From the day the chassis arrived, I was in communication back and forth with the guys at AB Arms. I told them all of my concerns and criticisms. They listened, and when they released the updated chassis, many of the issues we had discussed had been resolved. They didn’t puff out their chests and tell me that their baby was perfect. They didn’t tell me I was uninformed. They weren’t prideful. They were humble, easy to talk to, and they evolved. Not many companies can do that, and for that, I truly believe that AB Arms is going places. At the moment, I don’t believe that the Mod X is the best chassis on the market, but if they continue the way they are it will be soon. 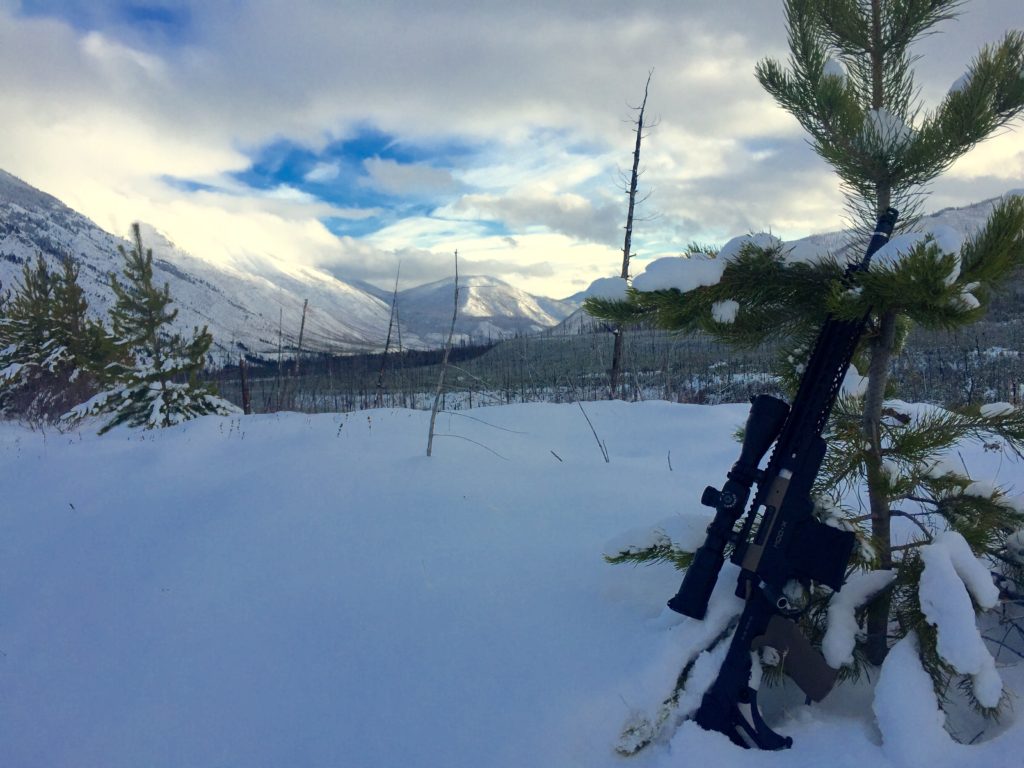