Our team of patch adams tonight, starts with

He is the owner and head of engineering of Hill & Mac Gunworks, please welcome Mac Steil!

Everyone who signs up gets a free We Like Shooting coffee mug, just send your email confirmation to feedback@welikeshootingpodcast.com

FRN listener meetup at the NRA Show in Louisville! meet us at the Cardinal Hall of Fame Cafe on Saturday May 21st at 7pm. Wear your We Like Shooting swag!

Troy has reserved us a respectable location at Cardinal Hall of Fame Cafe! We have the Freedom Hall Room reserved. It holds 40 people. http://www.cardinalhalloffamecafe.com it is just outside the north gates of the parking lot to the fairgrounds where the NRA is being held.

Please start plugging the meetup on all the shows until the week of NRA. Tell people to meet us at the Cardinal Hall of Fame Cafe on Saturday May 21st at 7pm. If they can say “Ambidextrous” as well as I can I’ll buy them a drink.

Seniors are flocking to the shooting ranges!

Coupon code WLS10  for 10% off any day, every day (not combinable with WLS30, only one coupon code at a time) for WLS listeners.   Don’t share with people who don’t listen, they don’t deserve it!   Or, better yet, just tell your friends they should listen!

OR buy a range pack and get $5 off your first order. Use code WLS5OFFRP

Brought to you by JC Arms and Ammunition is Going Ballistic with Savage1r (News/Politics/Etc.)

We are planning an event in Shelby Twp. Michigan in June during the weekend of the 11th. Our plan is to take 10 listeners and do some force on force fun using simunition. The event will cost 60 dollars per person, you will get a shirt, meet some of the cast and get a chance to shoot Aaron in the face. Who knows there might be a couple shock knives involved. If you are interested go to welikeshooting.com/shootaaronintheface and sign up.

I enjoyed this podcast when it was one hour ling. Great banter back and forth and loved the interaction between these odd characters. When it when to two hours, I thought it was tool ong, mainly because it took away from the other podcast I listened too each week.Now, I look forward to downloading this podcast each week and get to liosten, and laugh with, this clowns for one whole commuting day! Two hours is NOT too much and I love getting the new week’s podcast each Thursday.Keep it up, never lose Jeremy, and Lil, and Kelly, and Savage and Nick. Shawn- you have put together a great entereaining podcast.Signed,2tailedtomcat

Worth listening to just for the DEZ Tactical coupon! Besides that a fun show and great weekly listen. The Jeremy giant act is funny, but as a former Marine myself Iâd just trip him then help him up and drink to our service and those Marines we miss and then make diabetes jokes to Aaron. Lil would get a throne and weâd have Shawn and Savage carry it! Great show!

Great show, Aaron is by far the best panelist, he makes up for Shawn’s annoying habit of keeping them all on topic. Whether you’re turning in for Jeremy’s offensive rants or savages knowledgeable insights. give them a listen

You can do one or both, either way your contributions are greatly appreciated!

Just a reminder to join a gun related advocacy group (ask the guest about their state) and we always give out the Suicide prevention line, that number is 1 (800) 273-8255

“If you think there’s a chance, no matter how small, that there might be just ONE more happy day out there for you, call that number” 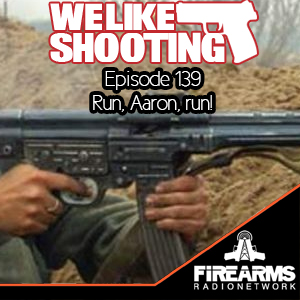