Before I get started, we are looking for your stories. Tell us a story of how you got into guns or the shooting world and if we pick your story, we’ll have you join us for our 100th episode! https://welikeshooting.com/story and submit!

Tonights story comes out of Detroit. A man calls 911 to report that he just shot someone on his front porch.

Wafer says: “Uh yes… I just shot somebody on my front porch. with a shotgun, banging on my door.” Wafer gives his address and ends the call by saying “thank you” and hanging up, even as police dispatch continued.

He was charged with second degree murder. Now what?

Tonight we are going to do We Like Shooting Theater sponsored by Manticore Arms. Where we re-enact movie scenes, our style. Tonight we will perform a scene from Full Metal Jacket, Aaron will be playing Private Pyle and Lil will play the part of Gunny Hartman.  The rest of the WLS team will be playing the other recruits in the platoon.

HARTMAN:
Private Pyle, if there is one thing in this world that I hate, it is an unlocked footlocker! You know that, don’t you?

HARTMAN:
If it wasn’t for jerks like you, there wouldn’t be any thievery in this world, would there?

PYLE steps down, from the footlocker. HARTMAN flips open the lid with a bang and begins rummaging through the box.

HARTMAN freezes. He reaches down and slowly picks up a jelly doughnut, holding it in disgust at arm’s length with his fingertips.

HARTMAN:
How did it get here?

PYLE:
Sir, I took it from the mess hall, sir!

HARTMAN:
Is chow allowed in the barracks, Private Pyle?

HARTMAN:
Are you allowed to eat jelly doughnuts, Private Pyle?

HARTMAN:
And why not, Private Pyle?

HARTMAN:
Because you are a disgusting fatbody, Private Pyle!

HARTMAN:
Then why did you hide a jelly doughnut in your footlocker, Private Pyle?

PYLE:
Sir, because I was hungry, sir!

HARTMAN:
Because you were hungry?

Holding out the jelly doughnut, HARTMAN walks down the row of recruits still standing with their arms outstretched.

HARTMAN:
Private Pyle has dishonored himself and dishonored the platoon! I have tried to help him, but I have failed! I have failed because you have not helped me! You people have not given Private Pyle the proper motivation! So, from now on, whenever Aaron fucks up, I will not punish him, I will punish all of you! And the way I see it, ladies, you owe me for one jelly doughnut! Now, get on your faces!

HARTMAN:
(to PYLE)
Open your mouth!

He shoves the jelly doughnut into PYLE’s mouth.

HARTMAN:
They’re paying for it, you eat it!

HARTMAN turns to the
recruits.

The platoon does push-ups.

While the platoon does push-ups, PYLE swallows hard to get down bites of the doughnut.

September 19th, we will be in Illinois for the annual Bullpup shoot and I think Kelli Sampsel will be there with us!  This is a big chance to shoot some great guns and hang out with awesome people. Go to bullpupshoot.com to find out more!

Thanks to Manticore Arms and don’t forget you can get all kinds of awesome accessories for your rifles! Check out their new ALFA rails for your AK at ManticoreArms.com. Seriously, go check them out. I love them. You need one. http://manticorearms.com/ALFA-RAIL-Keymod-Forend-for-standard-AK-MA-11200.htm

We also have a new giveaway that is open to everyone. We are supporting C-SAEF and helping them raise money to protect children by training school staff to deal with emergencies. Once they hit their funding goal of $25,000 we are giving away a Larue Costa Edition AR-15 rifle with an Aimpoint T1, Surefire light and more valued at $3500.

It’s open to anyone, to enter, visit https://welikeshooting.com/safe

Our sponsors are the best, but we couldn’t survive without our patrons! We’ll make you a deal, you agree to support us and we will send you cool stuff AND the best part is you get rewards back. We’ve given away thousands of dollars worth of guns in the last several months! You are missing out!

We are giving away more at $800 per episode. We’ll figure out what in the next couple of weeks!

Thanks to our syndication partners: 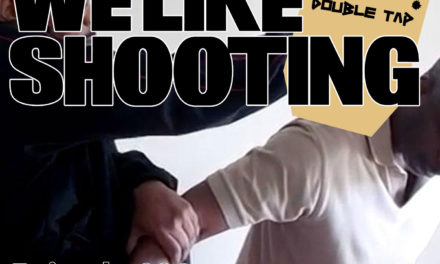